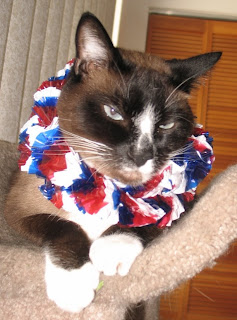 He is an eighteen-pound Ragdoll mix. Chou will be six on August 12th.

Chou has always been pliable, even as a tiny kitten we would stick him in a shirt pocket and he would just sit and watch the world go by.

Chou likes to sleep under the covers. You would think that a cat with so much insulation and fur wouldn't want to be any warmer, but nearly every night (or morning) he will come to the head of the bed and dig at the covers until we let him in. Then he makes his way to the area behind my knees and curls up.

I can tell when it's time to trim his claws because his nightly snuggles leave me with small holes in my leg from his loving caress.

Chou loves to lay on his back and invite anyone and everyone to rub his belly. People that do not like cats have decided "if all cats were like Chou, I would like cats." He is quiet and laid back, only meowing when in the vicinity of his food dish, or during his morning ritual: When Scott gets out of the shower Chou is waiting in the bathroom with his two front paws on the scale. He looks up at Scott and gives one plaintive "mew" and then wanders off towards the dining room. 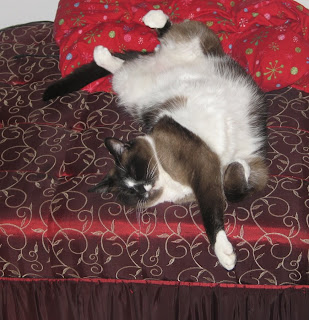 His favorite foods are ice cream, chips, and anything left on your plate. He will deign to eat cat food, and tries to convince anyone remotely within petting distance that he hasn't eaten yet.

Because of his love affair with food, we feed the cats about five times a day, about 1/3 of a cup split between all three kitties. Some people think this is ridiculous, but if we give them any more than that, Chou will scarf it all down and then give it right back all over the floor.

His fur is as soft as it looks. I love to lay my head on his belly and listen to his meaty purr.

When I'm having an anxiety attack, it's very soothing to have him on my lap and stroke his back.

Chou may be my middle child, but he is my favorite. (Shhh, don't tell the others!)
Crafted By Unknown at 11:26 PM

What does that poor cat have around its neck??

Chou is a slut.

It's easy to see why he's your favorite. What a love!!!

our dog does that snuggling behind the knees deal. it's nice, unless it's hot!