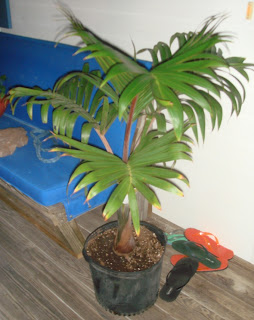 3 weeks from tomorrow we will fly to San Fransisco to spend Christmas with Scott's parents.

We're looking forward to spending the holiday in parts of the country where you can tell a little easier that it's winter.

We purchased our Christmas tree Tuesday night and will hopefully get it inside and decorated this weekend. From the picture, it looks like we are giving lots of flip flops as presents this year.

In actuality, all the presents that are already wrapped are sitting under the kitchen table, and Chou likes to hide behind them.
Crafted By Marisa at 9:17 PM 1 comment:

Email ThisBlogThis!Share to TwitterShare to FacebookShare to Pinterest
Labels: Christmas

I'll Be Home For Christmas

Scott and I will be heading out of the Key West airport after work on Friday, December 22nd and flying to San Fransisco by way of Atlanta, arriving around 11:15pm. We'll enjoy the weekend and Christmas Day with Scott's family, and then pile in their vehicle and drive to Portland.

We should arrive in Portland sometime on the 26th (ETA TBD). The only plans set in stone so far for the Portland part of the trip are that we are pretty booked up for Saturday the 30th. We'll be attending church at Bridge City that morning, and then attending a wedding and reception in the afternoon and early evening. Our plane leaves at about 11:15pm Saturday night, so we're hoping to hang out a little with the gang before catching our ride back to Key West.

Friday night we'll crash with Monica and John Paul, and I'm hoping to get in a trip to Colour Authority so I look a little blonder when we get back.

I'd love to have dinner with the Bob's World crew also on Friday if possible.

The interim will be spent largely with my Mom and Lou, with a possible trip up the gorge to Walla Walla/College Place. My cousin's twin boys are keeping their mother on bed rest as they'd like to make their debut a little earlier than due (January 12). If they've arrived by then, we'll probably make the trek to meet them.

Meanwhile back at the ranch, we are enjoying our new couch, delivered Friday afternoon. I've already napped on it twice.

Our house is shaping up and looking more home-like every day, come visit!
Crafted By Marisa at 3:56 PM 1 comment:

It's almost been two months since I arrived in Key West.

Life is pretty normal, except for discovering a cockroach on it's back in the bathtub as I was turning on the shower. He's now working with the cast of the new movie "Flushed Away."

The drive from Key West to the mainland is beautiful. The speed limit is 45 for about half the trip, so while it's only about 130 miles, it takes a good 3 hours. There's never a time where you can only see ocean, the longest stretch over the water is the Seven Mile Bridge.

The most authentic Mexican restaurant in the area is Salsa Loca. Considering how far we are geographically from Mexico, it's nice to find good Mexican food! The servers are all older white ladies, but whoever is doing the cooking definately knows what they are doing.

On Halloween evening Scott and I enjoyed dinner at Monty's, which is an outdoor bar and restaurant right on the boardwalk. We enjoyed a taco salad and watched the sunset, then walked on the dock out to a boat that was moored but had it's underwater lights on. There were 6-8 Tarpin fish swimming and dining on minnows in the light. It was an incredible view. We sat on the dock and watched them for a good half hour and then got 50 cents worth of fish food out of a dispenser and tried to feed them. They weren't interested. 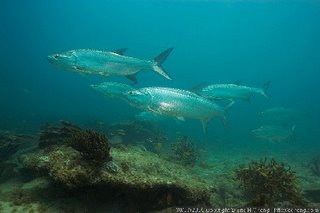 TV
Heroes - NBC: Great show. Hard to pick up in the middle but I'm all caught up in it even though I never saw the first episode.

Studio 60 On the Sunset Strip - NBC: I really enjoy this show. I like the dynamic of Amanda Peet, Bradley Whitford and Matthew Perry together. Wacko with a little drama thrown in. And it's great to see that Wings guy as a bit of an butthead.

Books
Running With Scissors - I know the movie just came out also, but two Saturdays ago I spent the afternoon reading the entire thing. A true account of the teenage years of the author, raising himself with the help (or hindrance) of a psycho psychologist and even more psycho mother. I'm looking forward to the movie even though I know it can't possibly be as good as the book. WARNING: It is a graphic book. And I don't mean pictures.

Get Fuzzy - It's true, I like a comic strip. This one features Rob, a poor schlub working in advertising, his dog (mother was a sharpei and father was a lab) Satchel and siamese cat Bucky. I bought two compilations on my own and was given two more as a birthday present. There are four more I'm going to have to acquire.