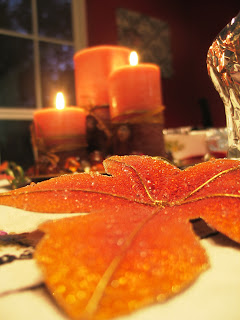 Since I work retail, my ability to be gone for the holiday season is pretty much nil. Scott and I enjoy cooking for others and hosting people at our house, so we decided to have Thanksgiving dinner at our home and invite other friends in the area that don't have family nearby to spend the holiday with.

I'll post some of the recipes over on our food blog, Are You Gonna Eat That?, but here's the menu...

The potatoes and mushroom gravy were a repeat from last year, but I think the potatoes were only a triple-bypass last year (I added sour cream this year).

The jalapeno-cheese cornbread recipe can be found here, but we messed with it a little, adding home-pickled peppers from my cousin Estee's garden.

Pineapple-Cheese casserole involves pineapple, cheese, a lot of butter and crushed Ritz crackers. It's apparently a very southern thing. It sounded a little strange but is surprisingly tasty!

The Buttermilk Pie is also supposed to be very southern, I have a piece in the refrigerator waiting for me.

I usually use the same pumpkin-cheesecake recipe every year but couldn't find it, so I did a google search and chose this one, but adapted it to use Trader Joe's pumpkin butter instead of the canned pumpkin and spices. I used the amount of sugar it called for and it was a bit too sweet, so if I do the same thing again I would probably skip the sugar and just use the pumpkin butter in place of the pumpkin, sugar AND spices. I also used two prepared graham-cracker crusts in place of pastry crusts.
Crafted By Marisa at 10:35 PM No comments: