Not As Dumb As I Look

The date on my RSVP cards is March 1st.

I am still sending out invitations.

Sorry... I intended to have them out by Valentine's Day and it just didn't happen.

How To Fake A Meatloaf 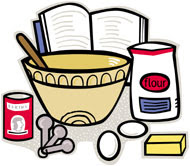 I am a vegetarian. By choice and because I was raised as one.

Meatloaf has always sounded good to me so tonight I googled "Morning Star crumbles vegetarian meatloaf" and came up with a few recipes. I printed them out, read them, and then did my own thing.

Keep in mind that measurements are all approximate, I didn't actually measure anything.

In a medium saucepan over medium heat, combine olive oil and onion. Sprinkle with celery salt. Saute for about a minute and add fresh mushrooms.

As mushrooms begin to soften, add burger crumbles and keep stirring to thaw crumbles. Once crumbles are thaw and mixture is fully mixed, remove from heat and add bread crumb mixture. Add eggs one at a time and stir in. Add ketchup and Worcestershire sauce. Sprinkle with garlic powder (about a 1/2 teaspoon).

Spray a 9x9 baking pan and press mixture into it. Bake for about an hour.

We only have a few things left in the kitchen at the condo and then it's CLEAN time.

I'm looking very much forward to being able to focus all my energy (ha ha ha) on the new house instead of splitting it between the house and the condo (and the wedding and the refinance, and doing my taxes and and and and).

I need to go to the post office tomorrow and trade a bunch of 26 cent stamps for some 41 cent stamps. Apparently I miscalculated the size of my outer envelopes and the RSVP cards.

The skunk has taken up residency behind the washing machine. At night she is coming out and helping unpack boxes and trash cans.
Crafted By Marisa at 11:57 AM 3 comments:

This Week with Chef Jenny...

The Blue Cheesecake is from the Diane Mott Davidson Book Dark Tort. If you are into murder mysteries and food at all, you should pick up these books. The writing isn't superb, but definitely good enough for entertainment.

Melt the butter over low heat and cook the shallot, stirring occasionally, until it is limp, about 5 to 7 minutes. Set aside to cool.

Using a large wooden spoon, force the mixture through a wire strainer to remove the lumps. (This takes a strong arm and some time, usually about 7 to 10 minutes.) Blend the shallot and scallion into the smooth mixture.

Bake for about 45 minutes, or until the cheesecake has puffed, the top is golden brown, and the center is set. Remove from the oven and set the springform pan on a cooling rack. Run a knife around the inside rim of the sprinform pan's collar to loosen any of the cheesecake that may have stuck. Carefully remove the collar.

Cool for about 10 minutes, if you are serving the cheesecake hot. (It will sink slightly as it cools.) The cheesecake may also be served at room temperature or chilled. Cover and refrigerate any leftovers.

We did this with no mixer, no roasting pan, no cookie sheet, no wooden spoon, no wire strainer, and an oven that runs about 25 degrees hot.

It's very tasty. Very light consistency. Reminds me very much of a quiche.

We're still waiting on the dessert cheesecake... the egg whites are taking their time becoming stiff.
Crafted By Marisa at 10:32 PM 4 comments:

A Rose By Any Other Name Would Be Confusing.

One of my favorite things about Scott is that he is just as silly as I am, if not more so.

Butterneck Toad is my recent nickname for him, but I love the way it rolls off my tongue. It's not meant in any kind of negative way, it's just a random smattering of words squished together.

We have a lot of nicknames in our house. Buster (the Boxer dog) goes by Buster, Buddy, Buddins, Buddins McPhee, B-Dizzle and "Brown Thing".

Interestingly, Pie Pie is also something Scott calls me. I've also been known to call Scott "Biscuit", Inky, and Picklewing.
Crafted By Marisa at 10:38 PM 2 comments:

Tomorrow morning Scott exchanges keys with the previous tenants of our new house. We will start moving tomorrow night.

We haven't done any packing since the day before Valentine's Day. We're only moving about a quarter-mile away, but it's still going to be a pain.

In some ways moving across the country was easier than this will be because this time we have to take everything with us and when I moved from Washington I just left a bunch of my crap in my house to be stored long-term.

My first goal once we're moved in is to try and de-nocturnalize the skunk. I don't think she's getting enough attention solely because she is awake while we're asleep.
Crafted By Marisa at 10:23 PM 1 comment:

How Do I Hate Moving? Let Me Count The Ways...

I've moved too much. I'm sure there are military brats that would say I have hardly moved at all compared to their cross-country childhoods, but as I am faced with packing up all my crap again, I'm inspired to count just how many times I've moved from one house to another.

I was born in Seattle, Washington. As far as I know we only lived in one house in Seattle after I was born, and then moved to: 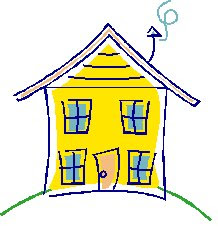 Sorry for my absence, in the last week my In-laws came and went and we decided to move. No, we didn't move this week, we just decided to.

The three of you that read my blog may remember this. The friends in the house ended up staying and breaking up, getting back together, breaking up, and then getting engaged this last Christmas. They got married yesterday and are moving to DC for real this time on the 19th.

Sooo... we'll be starting moving in to the house on the 20th. This is, of course, in the middle of trying to get married in April. I'm making our invitations by hand, which is involving a lot of cutting things out and putting them together, etc.

I'm also refinancing my house in Washington. I'm really excited about this for several reasons. Firstly because when we bought the house we financed 100% of it and had a first and second mortgage. The first mortgage is at 6.9% and the second is at 11.25%. We're rolling it all into one mortgage at 6.875% and the payment is going to be about $250 less than the total of the 1st and 2nd payments. The other reason I'm ecstatic about the refinance is that I HATE my current mortgage company.

I really don't hate many things or people. I don't believe in holding on to anger and hate because it will ultimately make me an angry and hateful person. But Option One Mortgage Corporation sucks big time. I worked in the real estate industry for about 8 years before moving to Key West, and am familiar with many different mortgage companies and programs. On the closing end I was a big fan of OOMC, there loans were very easy to close and their funding department was very easy to work with. Their "Customer Service" however, leaves MUCH to be desired. Moving to Key West was complicated in the home-ownership category. I didn't want to sell the house, so I managed to find a couple of renters.

With landladyship comes the assumption that there will be a late rent paid once in awhile. In the 2+ years that we've owned the house, I ended up making my mortgage payment on the 16th ONE TIME. That was in February 2007. In the year since, beginning on the first of the month, I get at least 3 phone calls a DAY from OOMC "reminding" me that my payment is due on the first and late after the 15th. EVERY DAY. And then when I try to tell these people I am well aware and remind them that I have made every payment since February 2007 well before the 15th, it turns out I'm talking to someone in India that doesn't have any control over ANYTHING.

Needless to say I am totally sick of the harassment. This is why I'm willing to deal with the stress of refinancing my house from across the country at the same time I'm getting married.

Today is my one day off until next weekend, and I'm going to try to do some packing and cleaning and invitation-ing. As soon as I'm done watching Rock of Love 2.
Crafted By Marisa at 12:39 PM 2 comments:

Up at 6:30am this time... thanks to a small black and white furry thing scurrying under the bed. I managed to catch her and have her snuggle for a bit but then she wanted to investigate the rest of the bed which is usually for the purpose of finding a place to poop.