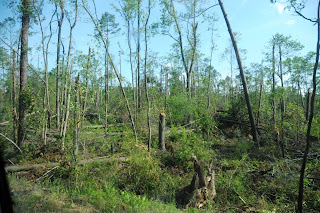 Sunday morning Scott had to work, so Andy and Monica accompanied me to the 11am service at our church.

After church we came back to the house and Monica and I colored our hair.

Scott got home and we all took naps until it was time to head out to Amy's house. On the drive out we saw a lot of the wreckage from a tornado that passed through the area a few weeks before.

The plan for the evening was to grill some veggies, sit in the hot tub and enjoy each others company.

While Amy and Carrie were cooking, I played Wii. Monica and I played tennis for a bit and then I got hooked on a dance game. 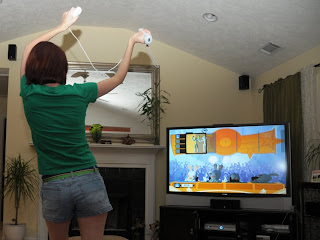 Being raised Adventist, I'm not a fabulous dancer, but I did pretty well! 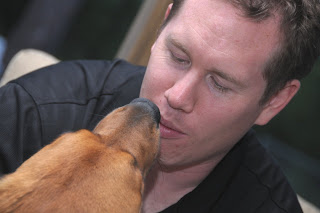 Cooper was happy to be the only dog among many dog-lovers, so he soaked up attention from everyone.

By the end of the night I was in need of re-hydration and there were no water bottles in the fridge, so Amy rigged one up for me. 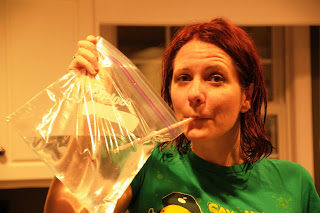 Crafted By Marisa at 5:11 PM No comments:

Andy and Monica arrived at Jackson Hartsfield airport in Atlanta at about 1:50am Saturday morning (May 2). 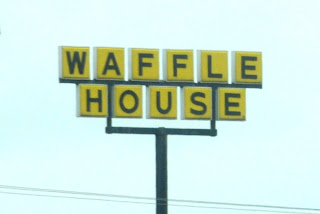 It had only taken me about five minutes to drive from our hotel (Comfort Inn) to the airport, but it took us about fifteen to find our way back, partly hindered by a vehicle going about five miles an hour on a 35mph road parallel to the freeway. We were all hungry so we stopped at a Waffle House (Andy & Monica's first, my second) and each had a grilled cheese sandwich and hashbrowns - Andy had them All The Way: cheese, onions, jalapenos, ham and chili. We were concerned that it would affect his ability to sleep, but we all managed to sleep a few hours after I called down to the front desk around 3am to find out what time check out was (Noon).

At 11am we had just gotten up and the phone rang - it was the desk clerk telling us that check-out was 11am. When Andy tried to pass me the phone, the desk clerk hung up on him. I called back down and she repeated "Check out is at 11am. You need to check out."

I replied that at 3am the desk clerk on duty told me that check-out was at noon. She told me I must be mistaken, the night clerk was the manager, he would never tell me the wrong information and check-out has been 11am for five years. All of this was in a rather rude tone and I was not impressed.

Even though this was kind of a crummy start to the day, we were excited about our adventure. Before we left the hotel I obtained directions to a Starbucks, IKEA and Old Spaghetti Factory (thanks to Google Maps). 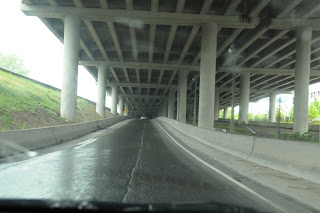 After gearing up at Starbucks we found our way to IKEA, much to Andy's dismay and my amazement. I had never been to IKEA before, and Andy has been dragged there a few times.

I managed to refrain from buying a bed and just escaped with some pillowcases, a cheese grater and a few other minor items.

After such strenuous excercise, we were ready for a hefty lunch at OSF, where I enjoyed spaghetti with mushroom sauce and mizithra cheese. 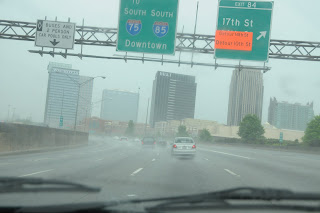 Just after we got in the car it started to rain. My driver's side window currently has a motor issue and will not roll all the way up, so we pulled under the shelter and tried to get the window to stick closed. When that didn't work we crossed the street (still in a deluge) so Andy could get some duct tape. We managed to tape the window closed, a sturdy enough fix to keep whoever was driving at the time reasonably dry.

We got back to the house around 6:30pm and after relaxing for a bit Scott, Andy, Monica and myself went to dinner at Ruby Tuesday.

After dinner we stayed up at the house for a few hours catching up.
Crafted By Marisa at 8:59 PM 1 comment: