When you get caught between the Moon...

I have to admit, Katie and I got a LOT accomplished that Tuesday morning while my nephew was in school.

After the donut shop we continued our journey to the Flat Iron district. 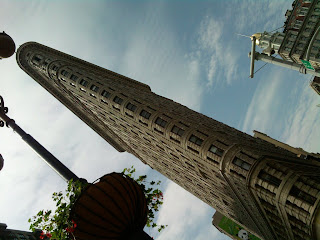 Conveniently located just across the street was something on Katie's NYC bucket list: Eataly. I had never heard of the place, but according to Katie it is somewhere Mario Batali and other Food Network folks like to shop, which is enough to interest me! (random vague side note: I saw a guy there that I KNOW is on tv, but I haven't figured out who he is yet...)

The whole place is one big store, make that HUGE store, but broken down into different areas and stalls and mini-shops and restaurants.

I got a big kick out of the boards next to the Vegetable Butcher: 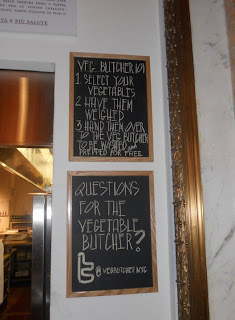 But also really enjoyed all the different shapes and colors of foods and drinks. I was in foodie/photo heaven! 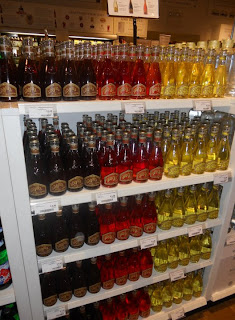 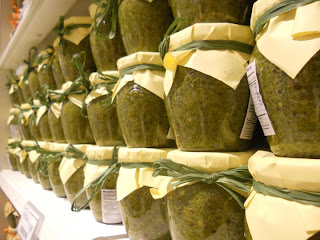 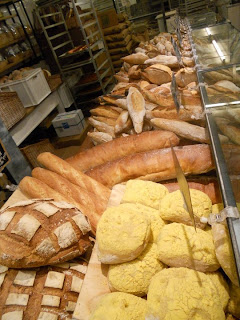 I think I could have stood at the pasta counter eternally... 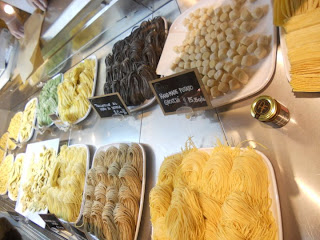 ...but we had to hop back on the subway and pick up the little man from pre-school and head home for a nap.

MORE Tuesday (to be continued...)
Crafted By Marisa at 2:14 AM No comments:

On Tuesdays and Thursdays my nephew attended pre-school. 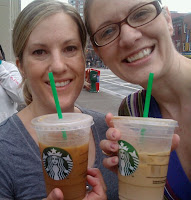 Katie and I dropped him off just before 8a on Tuesday and made a quick stop at the Starbucks nearby before getting on the subway headed for Chelsea.

We got off the subway and walked down 21st Street (I think) to the Chelsea Market. 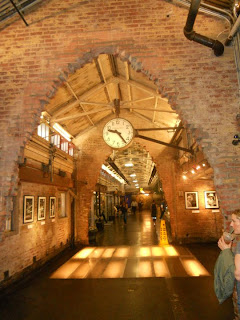 We walked through starting from the Food Network end where Masaharu Morimoto has his restaurant and bought freshly baked bread twists from a bakery before coming out onto 9th Avenue where we circled back around and took 21st to 10th Avneue and up the stairs to the High Line. 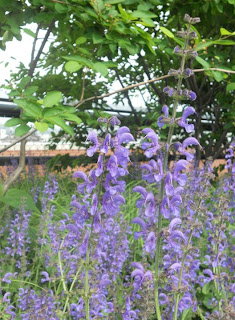 I won't go into a full description of the High Line (I'll let Wikipedia do that for me), but I will summarize by saying that it is a former raised railroad track converted into a park. 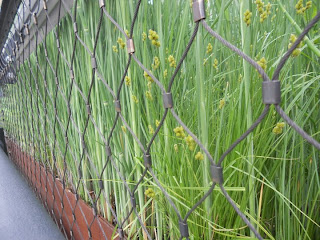 At one point it runs beneath the Standard Hotel. 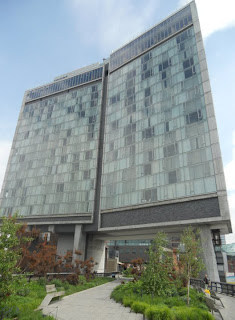 The landscape design was very nicely done and I could have spent all day up there. 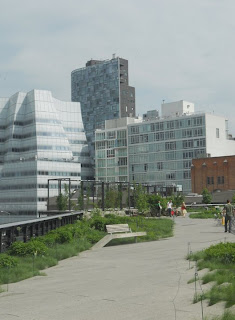 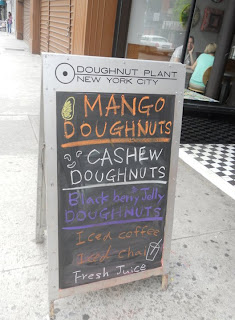 We walked to the end of the High Line and then headed toward the Flat Iron district. On the way we came across a fancy donut shop.

We were much more impressed with the decor in the shop than the donuts, the prices, OR the customer service... 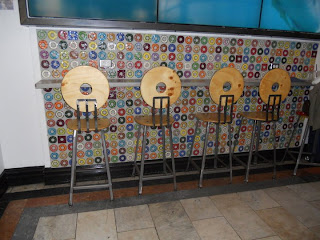 but how often do you get to disco while peeing? 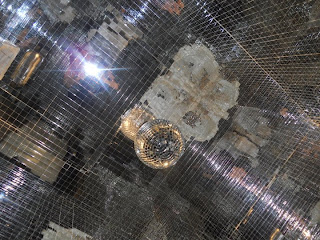 (Tuesday's escapades to be continued...)
Crafted By Marisa at 11:30 AM No comments:

I'm feeling very style-maven-ish today, particularly excited because I'm expecting the arrival of a pair of FREE shoes from Shoedazzle. I've been a member for about a year and a half and love it so far. As long as I remember to "skip the month" by the 5th, I don't get charged unless I am buying a pair of shoes, and hot stylin' shoes for $40 plus shipping? Awesome. I earned myself enough points to get a free pair and they are on track to arrive on my doorstep this afternoon. 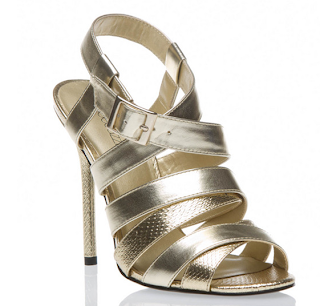 I'm thinking of pairing them with something along these lines: 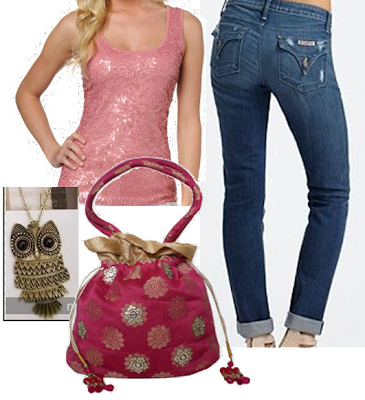 (Jeans from Saks, top from HSN, necklace from etsy, bag from ebay)

If you are remotely interested in the shoedazzle thing, let me send you an invite and I'll get more points (MORE FREE SHOES, HOORAY!).
Crafted By Marisa at 8:46 AM 1 comment:

There's Nothing You Can't Do... 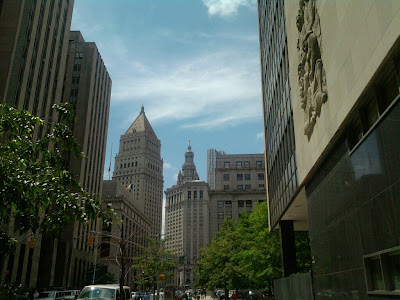 Sunday morning my nephew Jackson had a birthday party to attend, so I was able to sleep in a little while until he and Katie returned. Most of the day was spent entertaining Jackson and trying to keep him out of the way so Katie could pack for their move to Virginia.

We decided to get pizza for dinner, so we walked a few blocks away to Famiglia Pizzeria. We had them make us a large - half "Veggie" and half "Fresca" (basically a margherita). 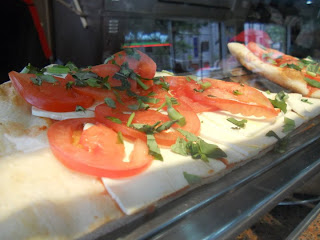 I had intended to try multiple kinds of pizza and cheesecake while in New York, only managed to have two different restaurant's offerings of pizza, and only ended up having cheesecake (although six different varieties) from the Whole Foods next door to where I was staying.

We went to bed at a reasonable hour Sunday night to prepare for our big morning out on Monday.

Katie had acquired tickets for the two of us to attend a taping of the Wendy Williams show. I will admit that I had never heard of Wendy Williams, but watched a clip or two of her on youtube before leaving on my trip, so I thought I had an idea of what I was in for.

I had no idea that I was going to be in for a crazy dance party and that Katie and I would have a ton of air-time. Wendy Williams herself is a riot, and the taping segments were fun, but the REAL entertainment is the audience-warmer, Kevin. 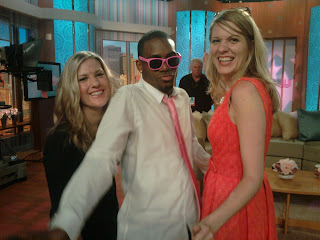 Kevin is a hoot. He gets everyone up and dancing and singing and laughing. He flirts with the entire audience and made us all feel welcome and like there was nowhere else in New York we would rather be RIGHT THEN. 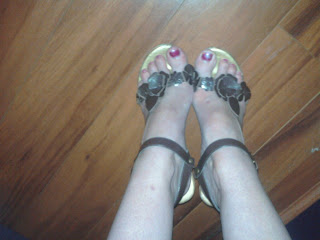 If you are in the audience, you are instructed to dress "fashionably", so I decided this was probably my one chance to wear heels and get away with it. I chose a pair that are pretty awesome, but that I also have quite a bit of experience wearing, so that I wouldn't be uncomfortable walking a fair distance or standing in them for quite awhile. Unfortunately, we were running a little bit late, so we walked much faster than those shoes are intended for, and I ended up with blisters on my feet on only my third day in New York.

After getting back to the apartment we watched the playback of our appearance on the show, took naps (thank goodness for 2.5 year olds that take naps!) and I finished off the evening with a big salad and some middle eastern and Indian food from Whole Foods. 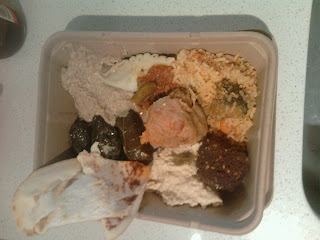 Fortunately, they healed quickly and I had several other pairs of shoes to wear throughout the week to avoid making the injuries any worse.
Crafted By Marisa at 4:54 PM No comments: