We got up around 7a, got right to work cleaning and packing and loading the truck. Cassandra came over to help mid-morning and stayed until we pulled out of the driveway. Phil also came by and helped load the truck for about an hour. 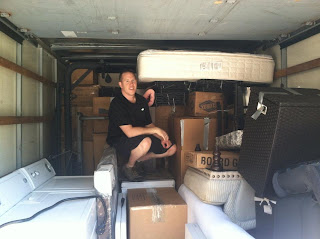 The walk through with the landlord was originally scheduled for 11a, but Sunday afternoon it was pretty clear that we wouldn’t even be close by then, so I called and rescheduled for 3p. As the new deadline loomed, we were pretty certain that we weren’t going to have everything out and clean by 3, but the landlord showed up right on time anyway (of course)! He was very understanding and is only keeping enough out of our deposit to replace the bathroom door, two window screens, and some blinds in the front room (a few were destroyed thanks to Bento and Rousey). These were all costs I expected and am happy to incur to not have to deal with the repair/replacement myself.

We finally pulled out of the driveway around 6p but still then weren’t actually on the road. We had to make stops at the vet for Chou’s prescription cat food and some Alprazolam prescribed for Bento, at Atlanta Bread Co for food (for me and mom since our car went to the vet), at Arby’s for food (for Scott & Andy with the truck), at Walmart for an air mattress (for Andy) and the Budget rental location to pick up the towing dolly.

The towing dolly was an adventure all in itself, the instructions are printed on big labels that are pasted to each of the wheels, but the bottom half of them has worn or torn off. It took some maneuvering but the Civic was finally loaded on the dolly and secured for travel.

The three cats were in their carrier and didn’t make a sound. The two dogs are in the back with a baby gate rigged up between them and the front seats (this was a necessity, all the quick stops we made trying to get out of town were a little hampered by a dog jumping up in to whichever front seat had been vacated). Stinkerbell was riding in a soft sided carrier that she had spent all day in while we were finishing the move-out.

Our progress was decent and reasonably uneventful, we were originally planning to stop at a friend’s house in Smyrna, TN (just outside of Nashville). We made a stop at a rest area to let the dogs do their business, at which time I gave Bento an Alprazolam (Xanax in a doggie dosage). The prescription said 1-2 pills every six hours for anxiety, and he was wound pretty tight after seeing us empty the house and then be cooped up in the car for several hours. At this stop I also let the cats and Stinkerbell out of their respective carriers, Stink took up residence in my lap, and Maui decided he wanted to be there, too. Stink wasn’t thrilled with having Maui sitting on top of her, so she scrambled out from underneath and climbed up onto his back. She laid down, straddling him like a cat straddles the back of a couch, her tail dangling in his face. He didn’t seem to mind too much. Then Minx decided she wanted to be in the front window on the dash, so she climbed up next to the steering wheel, stepping on the windshield wiper/wash/turn signal stick, filling the windshield with cleaner and wipers working furiously.

The next stop was at a gas station, to fill the truck and top off the car. While stopped there, we had a quick pow-wow and decided that arriving at a friend’s house at 2a and THEN setting up a tent and finding all of our things did NOT sound like fun.

Mom did some research on her phone and called the La Quinta in Smyrna, reserving us a room with two queen beds. We pulled in around 2:30a and soon decided it would be beneficial to have a second room, as Andy was feeling overwhelmed and exhausted and there was not enough room to put out his air mattress.

I had decided the cats would stay in the car, they have a litter box, carrier and blankets, and the big water-cooler style water bowl stays in the car. I fed them and bid them goodnight.

In the motel, Bento was getting more and more hyper, trying to escape out the door, jumping up on both beds, looking out the window. I thought that maybe eating dinner would calm him down some, but first I gave him another Alprazolam since it had been 4 or 5 hours.  I served the dogs dinner, with their usual twice daily dosage of Benadryl.

About 10 minutes later Bento started falling in to things and stumbling. As his body stopped cooperating, his mind was wound tighter and tighter, shortly the poor dog was high as a kite. Pupils the size of dinner plates, but legs that moved like they had 15lb weights attached to each foot.  He was confused and desperate.

He tried jumping up on one bed, then jumping down (collapsing in a heap on the floor every time), jumping on the other bed, etc. Stumbled back and forth to the door, pushing it with his nose so it moved in the door frame, making a noise not generally acceptable in a hotel at 3a.

By this time, I was so exhausted I could not handle the stress that came with accidentally over-medicating my dog.  I started to have my own panic attack.

Panic attacks for me aren't hyperventilating, they are vomiting and diarrhea. I spent the next six hours trying to control myself, after having established that Bento wasn't likely to die from his experience (I called the vet) but it would have to wear off.

I finally got to sleep around 9a Tuesday morning, and slept for two hours.
Crafted By Marisa at 2:16 AM