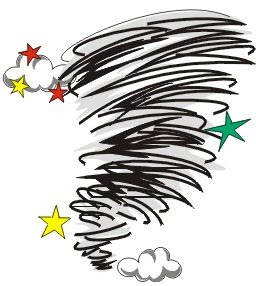 Today was a much better day overall.

There was a bit of chaos at the store, but from customers not from employee relations.

A woman entered the store and asked an employee for help finding a carrier for her cat. She was very rushed and demanding, and berated the employee for pointing out things that are "Way TOO Big, what's wrong with you?!" Sadly, I was in the office at the time, or I would have stopped this behavior before it escalated. As I was not there, she continued to bully said employee and then demanded that the cashier take her before the rest of the line that was already formed.

The cashier is a lovely young lady named Jewel. Jewel is 16 and has been working at the pet store for two years. She is very sweet, agreeable, hardworking, and pretty. No one yells at Jewel (other than her parents, of course) and certainly no one bullies her.

When Rushing Woman demanded that Jewel take her next, Jewel was startled and stopped in the middle of the transaction she was already halfway through to cash out the psycho. I was still in the office, or I would have headed this disaster off at the pass. Rushing Woman turned to Other Lady and said "Sorry I'm being rude, but I have a cab waiting and it's $20 a minute." (I am certain that there are NO taxis in Key West that charge anywhere near that much.)

Other Lady said "Well, you ARE being rude!" to which Rushing Woman replied "Well why don't you just be quiet?!".

Right about this time, the employee that had been dragged into service by Rushing Woman found me in the office and told me what was going on. I asked if everything was ok now and she assured me it was. Five minutes later she came running back in and said "the other lady made Jewel cry!".

I came out and by the time I reached the register both women were gone and Jewel had composed herself. Before I could get a full report, the phone rang and the caller asked for the Manager. That's Me.

I picked up and listened to Other Lady, who is a long-time customer (of course) who spends a lot of money in our store (I'm sure) on a regular basis. She felt that the entire situation was handled horribly and couldn't believe that "that girl at the register" allowed such behavior from Rushing Woman, and maybe I need to give her more training.

I took a deep breath and apologized on behalf of Jewel, explaining that she is not accustomed to being bullied and I agreed that she shouldn't have given in, and furthermore I was sorry I had not been available to handle the situation. In all I said "I'm Sorry" and "I Understand" about three or four times, each. Apparently this was not everything Other Lady was hoping for and said "Well..." and just waited for me to offer more. I sputtered a few more apologies and then she hung up.

The three of us (Jewel, Myself and the other employee) regained our composure and I went to work in the dog food department.

About twenty minutes later I went to the front of the store and there was a woman holding a small pet carrier and demanding to exchange it (we don't return pet carriers at all) and "I'm in a big hurry, I have a cab waiting and this is just too small and I don't like the print on it..."

I deduced correctly that Rushing Woman was back with a vengeance. I spoke calmly to her and explained that all the pet carriers like the one she had were in the same place and we only had the one size.

"I need something bigger! My cat won't fit in this and it has to be airline approved!"

I didn't take the time or effort to question why she had bought it in the first place when it clearly would not hold any cat more than 6 months old. Instead I pointed out the carriers that are airline approved guaranteed, and opened one to show her that a cat will fit happily inside.

"That's much better! I want it! Can you exchange it for me please?" She thrust the original carrier and receipt into my hands and barged towards the counter.

"M'am, you will have to wait in line. You already upset several customers earlier and I can't let you push them around again."

The five people waiting in line at the counter were witnessing all of this and I had no sooner finished my sentence than she turned to the customers and said "Do you mind if I cut in front of you? I have a cab waiting?"

The two women who were next and 'on deck' half smiled and said they supposed they didn't mind while the other three increasingly incredulous customers watched in horror. I assured the two women who had agreed that they didn't need to do that, but they both just said again that it was fine, one of which adding under her breath "whatever it takes to get her out of here!"

Jewel stepped aside and I rang up the return/exchange as quickly as possible. As I was handing Rushing Woman her receipt, she said "I need a comb! Do you have a comb for a cat?" Jewel began to describe where to find the comb, and then stopped and wisely said "I'll show you."

I rang up the next customer as Rushing Woman waited for Jewel to GET her a comb, meanwhile saying "can you charge me for the comb please?" while I tried to explain that I had to scan it first to find out how much it was going to be and still ring out the current customer.

Finally the comb arrived and the customer that was actually next acquiesced to Rushing Woman's demands to be rung out next.

As the troublemaker left the building with her entourage (did I forget to mention she was dragging three other people with her and ordering them around as well?) the remaining customers and employees breathed a sigh of relief.

There was a moment of silence.

The hurricane had passed.
Crafted By Unknown at 10:25 PM

Man, people like that are what inspire my extreme potty mouth.
If I had been one of those customers there (either time), I would not have been so accommodating for her.
What a c**t!%@!%^@!%$#!%

I can only say here, Good God! The sens eof entitlement some peole have astounds me.